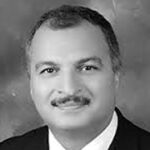 Dr. Almai graduated from King Faisal University School of Medicine, Saudi Arabia. His early career included pediatric training and in 1991 he received the diploma of child health (DCH) from the college of physicians and surgeons, Dublin, Ireland. Dr. Almai moved to Tufts University Boston, completing two years of general psychiatric residency before joining Yale University where he completed his general psychiatry residency and immediately followed with a fellowship in child and adolescent psychiatry. He also completed a research fellowship at the Yale Anxiety Disorders Clinic. Dr. Almai has publications and research articles in various Scientific American journals and other publications. He was appointed as assistant clinical professor of psychiatry at Yale University School of medicine, where he remains on staff part time. In addition to the afore mentioned post, Dr Almai has held positions as medical director for varying children’s services and centers and established his own private psychiatric center. He is American board certified in both general psychiatry and child and adolescent psychiatry.