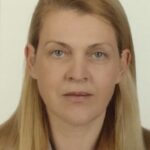 Angeliki received her medical degree from the Sapienza University of Rome with distinction in 1991. She was initially trained in Paediatrics in Greece and completed her paediatric residency and neonatal fellowship in the UK. She worked for four years as a neonatologist at the Winnicott NICU at St Mary’s Hospital – Imperial College Healthcare NHS Trust, the first NIDCAP training centre in UK.

She holds a Master in Respiratory Medicine from Imperial College London University, certification in neurodevelopmental assessment and she is a European Resuscitation Council Instructor for Paediatric and Neonatal Life Support.

Moving to Greece in 2002 she joint the NICU staff at P.& A. Kyriakou Children’s Hospital in Athens. She is an NICU graduate parent with a long-term commitment throughout her 25y career to Family Centred Care and Family Integrated Care. Since 2019 she has been the medical director of the Hospital NICU. This is an integral part of the 2nd Department of Paediatrics of the National and Kapodistrian University of Athens and a pioneer NICU in Greece that has moved away from traditional care delivery integrating parents as providers of their infant’s care.